“Shut up!”, a 14-year-old boy standing in front of his school shouted angrily at the Fridays for Future procession as it was passing him, chanting the movements’ slogans. He remained almost unnoticed by the young activists who repeated their “What do we want? Climate justice! When do we want it? Now!” rather bashfully, perfectly in line with their non-violent, peaceful public presentation during the meeting and the march in the streets of old Prague.

But the two of us, communication scholars in their forties who joined the global strike as part of their fieldwork, noticed the young man very well. More than that, this aggressive, rejecting reaction of a young person to the efforts of other members of his generation remained in our memories of the event as a highlight.

Actually, this incident may have important implications for how we think about our data, the mediated representations of young climate activists, and how we interpret them. The climate movement and the whole environmental political and public agenda are often perceived in terms of a generational conflict. The dispute between the elderly who ‘ate out the whole world’ and ‘destroyed the planet’ and the ‘spoiled, ungrateful children’ who ‘abundantly enjoy what older generations created for them’ seems to be an inevitable part of every general discussion on the topic. Our preliminary qualitative analysis of media representations of the Fridays for Future movement, as well as of the users’ online discussions, suggests that the motif of climate change dividing generations is very strong in the Czech online public discourses.

But the reality seems a bit more complicated. Journalists often write about the ‘conscious young generation’, describing the youth as ‘united and unstoppable’, as ‘the only option that the world has’. However, the minor incident the two of us witnessed suggests that climate is certainly not a topic that unites the entire young generation. Moreover, the climate is not a topic exclusively connected only with the young generation. Even the first look at the demonstrating crowd shows that the protesters are not solely children and young people, as one would expect in a strike called ‘a school strike for climate’. Yes, the young people organized the event, as in other countries, and gave most of the speeches on the stage. However, they were only a minority among the protesters. Most of the protesters were older generations, parents with children, or representatives of various non-profit organizations.

The surveys of attitudes on the issue of climate change carried out among the Czech population confirm our assumptions. Their results align with what we saw at the demonstration – the climate is not a topic that divides generations, and attitudes do not differ significantly according to age. Older people are also interested in the environment and, conversely, not all young people feel the need to fight climate change and protest in the streets. According to one of these studies, younger people are able to choose more visible means of communicating their attitudes which makes them more noticeable in the mediated public sphere. In addition, young activists who make specific demands on the governments of their countries are still surprising political actors and can thus be given more space in the media as specifically newsworthy.

It, therefore, seems that one of the main frames used by the Czech media in reporting on youth climate activism, i.e., the generational conflict, is not supported by the actual attitudes of different generations on this issue. With the way they present the topic, the media can thus contribute to strengthening the already intense polarization of Czech society evident in public debates on many global or international issues. It may be particularly unproductive in the case of the climate crisis. This issue needs to be dealt with jointly, leaving aside various culture wars flooding many recent public discussions and not excluding the one on the climate.

The first challenges – How to create a good online media database? 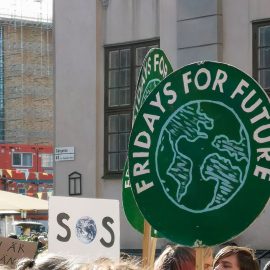 What’s in a logo?

Mothers in the YDIGI project: Purpose, guilt and hope

Fridays for Future Research project
Manage Cookie Consent
To provide the best experiences, we use technologies like cookies to store and/or access device information. Consenting to these technologies will allow us to process data such as browsing behavior or unique IDs on this site. Not consenting or withdrawing consent, may adversely affect certain features and functions.
Manage options Manage services Manage vendors Read more about these purposes
View preferences
{title} {title} {title}